Why I Love Apple 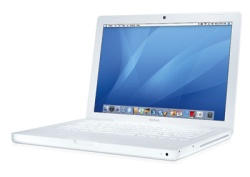 I bought a white Macbook mere hours after they were first released. It’s a beautiful machine, and I have enjoyed every moment with it so far. Some of its common uses include: giving presentations to my classes (with Keynote), computer-based music notation, recording musicians, and writing essays (lots of them!). Heck, I even use the built-in camera to record my conducting lessons (via iMovie)!

However, my machine has not been without flaw. Since it’s a revision “A” product, I’ve experienced some of the bugs that have plagued the first generation Macbooks. First of all, my Macbook “mooed,” but a firmware update took care of that.

Second of all, the shell around the touchpad (the “palm-rests”) became discolored, but I probably should have washed my dirty paws a little better before using the machine. 🙂

Third, my Macbook developed a distracting “screen flicker” problem. I thought I could live with it for a while, but the flickering increased in severity, sometime blacking out the screen for seconds at a time. I had enough. Read more