Create Your Own Desktop Webapps with Fluid (Mac OS X)

This is neat. How would you like the ability to create your own standalone webapps on your Mac OS X desktop? In other words, what if you could turn any website into a Mac desktop application?

Fluid can do just that.

In seconds, Fluid can take a given website – such as Gmail, Google Docs, Facebook, eBay, YouTube, or whatever you want – and package it into its own Site Specific Browser (SSB). The SSBs can then run as complete and independent Cocoa applications, complete with their own dock icons and menu bars! Fluid SSBs are based on Safari’s WebKit rendering engine. Read more

Just thought I’d share this – I had a tab get stuck in Google Chrome recently, and when it crashed, this is the error message it displayed: 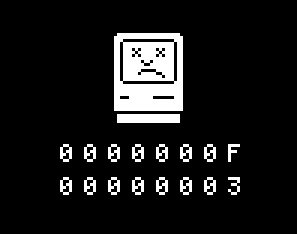 As well as the dreaded “Sad iPod” face that you hope to never see:

Somehow, this touch of humor makes me care a little less that my browser just crashed and burned! 🙂

I just upgraded from a Motorola Razor and bought an iPhone G3. You’ve probably seen your friends playing with their phones, and wow, it is really that cool. I never sucked it up to buy an iPod, so I enjoy the ability to have some music, a calendar, a camera, and a phone all in one little device. Some cynics may quickly point out that it isn’t a good iPod, or the phone sucks, or whatever; they are missing the point. This is an all-in-one thing. That can opener and cork screw on your Swiss Army Knife suck, but THEY WORK. The iPhone is the Swiss Army Knife of technology.

The only “problem” I’ve had so far is that when I bought the phone, it was activated within minutes. My Razor went dead before I had left the store, so I ran home as quickly as I could so I could hook up my phone to my computer. You setup your phone by launching iTunes (weird, I know). It only took a couple clicks and the thing was working. Some co-workers have had trouble with the sensors on the phone and have had to get the phone replaced. I’m wary, but unworried.

When you get an iPhone G3, you can surf the web all day without paying any extra money because you are tapping into the “public” G3 network… sometimes slow, but are you kidding? It’s frickin’ great. I took the subway home today and a gentleman asked me which stop he needed to get off at, and poof, I hit up Safari and Google maps and I told him exactly which bus to take and when he’d arrive within a couple minutes.

I have to stick it to the man and say “AT&T you suck”… seriously… they are getting enough of my money each month between DSL, landline, and a mobile plan. Some places, I could pay rent for less than what I pay AT&T each month. Da–yam!

You can now purchase an iPhone at any Apple Store, AT&T Store, or Best Buy.

Nothing cheeses me off more than lazy Mac OS X users who don’t lift a finger to secure their OS. Yeah, Macs are currently not the most common target for hacks and viruses (viri?), but that hardly means that they’re invulnerable.

You can read more about some OS X security stuff, but here’s the quickie way to turn on your secure virtual memory:

A swap file is simply a temporary file that’s used while you edit a file. If you’ve ever used the OS X terminal, you may have edited files using one of the command line editors, like vi. You may have noticed that when you edit some_document.txt, there will be a file created some_document.txt.swp while you are editing the file… that file persists until you’re all done editing the file and you’ve closed the editor. Virtual memory works similarly… it writes the contents of the RAM to a temporary file. Enabling “Secure” virtual memory encrypts this temporary file while it’s on disk… so even if someone has access to your disk, they won’t be able to see the contents of your memory.

I spend a lot of time with computers… it’s my job. Most of the time, people worry about patching up their Windows machines — and for good reason! Similar to our (slightly dated) Windows Security Guide, the purpose of this page here is to list the steps for securing a Mac OS X computer, including commands for lab managers and network admins who have to manage a large number of these computers. In the last week, there have been 3 security exploits / viruses for OS X. No OS is completely secure! So it begins… Read more

Review of Safari 3 for Windows

So Apple went on its second major foray into the world of Microsoft with its release of Safari for Windows (the first being iTunes). I’m not necessarily a connoisseur of browsers when I’m at work just trying to get things done, but right off the bat I noticed the slick implementation of Apple’s signature Aqua-style graphics. Apple didn’t settle for Microsoft’s standard clunky window buttons, and they even put in their own window scroller and check-boxes, so in my opinion, browsing the web on Windows never looked so good. In fact, in my work-crazed stupor, Apple’s faithful rendition of the Mac version of Safari easily lulled me into a blissful fantasy-world where I was working from home on my Mac… that mirage only lasted so long, though, because Windows keeps stealing my focus, its Desktop search feature can’t find its own ass with both hands, un-closed pop-ups from any application gum up the *entire* desktop (instead of just the parent application), and my soundcard driver went on the lam again. Oh, Windows, if I could kick you in the nuts… but I digress. Read more