Review of Safari 3 for Windows

So Apple went on its second major foray into the world of Microsoft with its release of Safari for Windows (the first being iTunes). I’m not necessarily a connoisseur of browsers when I’m at work just trying to get things done, but right off the bat I noticed the slick implementation of Apple’s signature Aqua-style graphics. Apple didn’t settle for Microsoft’s standard clunky window buttons, and they even put in their own window scroller and check-boxes, so in my opinion, browsing the web on Windows never looked so good. In fact, in my work-crazed stupor, Apple’s faithful rendition of the Mac version of Safari easily lulled me into a blissful fantasy-world where I was working from home on my Mac… that mirage only lasted so long, though, because Windows keeps stealing my focus, its Desktop search feature can’t find its own ass with both hands, un-closed pop-ups from any application gum up the *entire* desktop (instead of just the parent application), and my soundcard driver went on the lam again. Oh, Windows, if I could kick you in the nuts… but I digress.

Safari 3 seems to work fine on the web sites I’ve been hitting for the past couple days. For example, the new Yahoo mail is not officially supported, but it seems to be fully functional with Safari 3. Likewise, I was able to run my WordPress control panel without any major issues.With most Ajax-heavy sites, basic functionality is usually there for any browser, but things around the fringes may start breaking, so I’m not terribly surprised that Safari 3 has had some trouble here… in CSS and Ajax is where the browser-specific demons lie.On another Ajax site, I did notice some broken functionality when using Safari 3, so you know those demons are out there to haunt web developers, which brings me to the crux of this review: now I have ANOTHER browser to test when coding (and IE was already a huge pain in the ass).

Safari MOSTLY follows the same rendering as Firefox, with some quirky caveats… the biggest is probably Safari’s stricter interpretation of Javascript: Safari does not tolerate the use of reserved words as Javascript variable names. Firefox does. Safari’s implementation is probably more correct (just ask any coder), but the reality is that some Javascript won’t execute in Safari. I’ve read some of the documents about how the Gecko engine should behave when handling floated elements as they come into contact with cleared items, and I became convinced that BOTH Safari and Firefox were rendering incorrectly according to w3c standards (I’ll leave IE out of that discussion entirely… except you Steve Ballmer… my shoes… need to meet your nuts). At least Safari 3 finally correctly handles the label tags for forms.The preferences are tucked away under the Edit menu. It’s a bit traumatizing not to have an application menu if you’re coming from the Mac version, but that’s more sensible than Microsoft’s ridiculous time-sucking habit of having menu items for “Customize”¦” and “Options”¦” Really”¦can anyone remember which is which?

It’s no surprise that Apple is taking some serious flak regarding Safari’s “superior” rendering times. They gotta expect that the first thing any tech-head is going to do is to try and replicate the boastful test results, and of course some of the results are going to be proven “questionable” or dead-wrong. But hey, if you want the scientific details of how it actually performs, talk to the developers and scientists – don’t be thumping the copy of the latest ad.

The only real difference I’ve noticed at a functional level is that Safari’s security seems to be tighter than IE or Firefox. We have an https page at work for an internal CRUD web app. Safari would not load it because we were using our own SSL certificate. I know our implementation of the cert is wrong, but we just hadn’t gotten around to fixing it because IE and Firefox only complained; Safari flat out refused. I guess that’s the correct thing to do, but it’s a pain.

I have to object to how Apple “distributed” Safari 3 in a decidedly “Microsoft” fashion… they bundled it on to the latest iTunes release, which has generated some warranted criticism from the CEO of Mozilla (Jobs… do you need a kick too?). But hey, we’re in the Bush-Cheney era, so go ahead and push the limits and take your chances with the law – the courts might slap your wrists in a couple years if they ever get around to it. 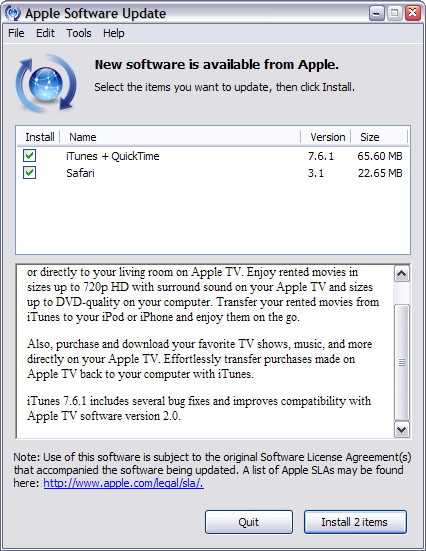 What would make me melt is if Safari got a plugin like Firebug. That little guy has saved my life as a web developer too many times to count.

— Much faster performance. I have no scientific data here, and I refuse to drink the Firefox Kool-Aid. I think IE is a pitiful attempt at a browser from a company with the resources that Microsoft has, but it’s actually Firefox that’s the biggest memory hog on my system (sorry lil’ Fire-dudes). When Firefox attempts to cache the state of every single page, my XP machine slows to a crawl, even with 2gb of memory. Safari has behaved nicely for the past 2 days with just as many tabs open, so they must be doing something better than Firefox.

People have flamed Safari for not having tabs enabled by default”¦

but maybe this was corrected, because when I installed, the tabs were enabled. Firefox didn’t have them enabled by default either for while, but it’s been a while since I’ve installed it.

Safari gives you no search box choices beyond Google and Yahoo. Hey, Apple faithfully recreated this too! Oh wait… on the Mac version you ONLY get Google… WTF? Anyhow, there are a couple ways to hack Safari’s Google search limitation on OS X (including a search-box plug-in), so presumably someone will crack this nut for Windows too. Makes you wonder what kind of weird marketing agreements are in place for the software to have that arbitrary restriction.

Editing pages in WordPress, an Ajax CMS, worked, but it had a few surprises. Safari took the liberty of injecting some formatting code into my post:

I *hate* stuff like that. This reminds me of the little Paper-Clip guy in Microsoft Office (may he too get kicked in the groin). I don’t mind that type of functionality so long as it’s off by default.

Safari 3 is not an amazing piece of software, but it may offer the home-sick Mac folks some solace. At best it’s a working browser with features comparable to Firefox for the average user; at worst it’s yet another browser for developers to consider while designing cross-platform web pages. Meh… whatever.