Looking to kill a few minutes of time at the end of the workday while still appearing busy? Try the maddeningly frustrating yet addictive game called Red Square. 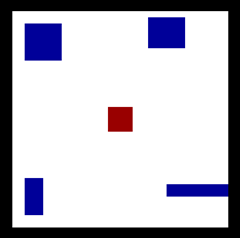 As it game, it doesn’t get much simpler than this. All you do is click a red square once and hang on for dear life! That’s right, it’s a bit like bull riding.

Once you click the red square, the blue shapes will start moving automatically around the screen. The object of the game is to avoid conflict – if the red square runs into the wall or a blue shape, the game ends.

The first time you play, I bet you don’t even last one second (no sexual innuendo intended).

After three or four games, you’ll start getting the hang of it, but then you’ll notice that as the seconds tick by, the blue shapes start moving faster and faster. If you manage to make it past twelve seconds, it becomes a game of sheer adrenaline as you desperately try to keep the red square out of harm’s way.

A Few Tips on Increasing Your Score

First of all, avoid all sharp, jerky movements. Those only end in trouble. Keep the mouse movement slow and steady. Next, sit as far back from your monitor as you can. I found that the farther away I got, the easier it became to keep track of all the blue shapes.

Most importantly, don’t focus on the red square! Try not to even look at the square if you can. Instead, you should focus on the movements of the blue blocks. Look for the patterns that they create as they bounce off the walls to get an idea of where they will head next. Keep an eye on the wide rectangle especially – it covers a lot of area as it sweeps across the screen. I found that if I kept at least half my focus on the wide rectangle, avoiding the other blocks was easier. 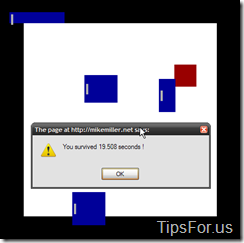 Finally, I suggest that you keep the red square moving at all times. My first plan of action was to find sanctuary zones and keep the block still, but that didn’t last long. When I tried to keep the square moving in a kind of dance around the trajectories of the blue blocks, my “alive time” improved tremendously.